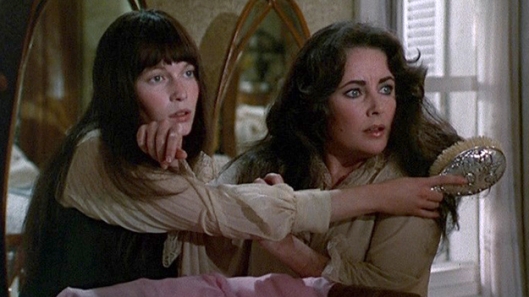 Infamous as one of director Joseph Losey’s more extreme efforts, Secret Ceremony is an example of what the French call “cinema maudit,” i.e., films unjustly maligned by critical reputation. By any measure, it is not an ordinary effort. It exudes the sickly sweet, faintly nauseating aroma of forbidden fruit, bizarrely excessive, alternating between garish hysteria and serious, if warped, expression.

Cenci Engelhard (Mia Farrow) is a wayward, wealthy nymph. She latches on to low-budget prostitute Leonora (Elizabeth Taylor), and treats her as if she were her long-lost mother. Leonora allows herself to get drawn into the fantasy, both to help her overcome the death of her own daughter and to enjoy the luxury of Cenci’s cavernous, overstuffed mansion. Things proceed with edgy, sexy opacity until Cenci’s stepfather Albert (Robert Mitchum) appears to rekindle their incestuous relationship, with disastrous consequences.

Even at its most overwrought, however, there is a lot to sustain interest in Secret Ceremony. Cenci always has a new trick up her sleeve to keep both Leonora and Albert on the hook. She is neither a simple nut case nor a passive victim and Farrow makes the most of it. Albert, an academic in a rumpled raincoat, is more proud of his sexual exploits with his students than of any scholarly achievement. Mitchum’s commanding presence nonetheless gives the otherwise thoroughly repellent Albert a ghastly, queasily believable allure. Taylor is never entirely believable, particularly when she cannot resist donning a high-fashion outfit left by Cenci’s mother. She looks great, but the lapse into star glamor posing is so blatant it practically feels like a production number. She does at least make Leonora’s parasitic character compelling and almost sympathetic.

Losey, cameraman Gerry Fisher and production designer Richard Macdonald provide a suitably lush backdrop to these febrile goings-on, but then they always do. While it is difficult to believe that anyone, much less a waif like Cenci, could fend for themselves in the gigantic house she calls home, it provides an opulent eyeful. Indeed, the house is really the star of the film, since possessing it is the root of the conflict. Expressing themes through externals like architecture is typical of Losey’s method. In that sense Secret Ceremony, maudit or otherwise, is entirely in keeping with his career. That assessment may not please anyone out of step with his sensibility, but it does help to place the results.