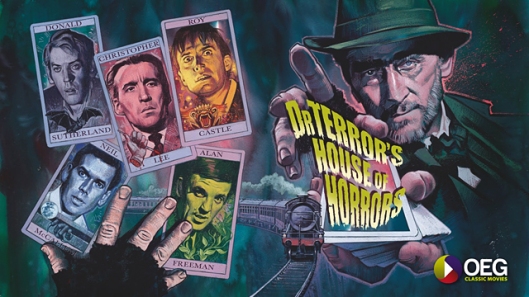 Despite a title that practically shrieks “Exploitation horror!” Dr. Terror’s House of Horrors is a smoothly crafted, entertaining, occasionally witty anthology of five thriller stories, directed by well-known horror auteur Freddie Francis, with Peter Cushing in the title role. While not subtle, the film’s shivers are far from cheap or crude. In fact, there is an undercurrent of sly self-awareness just shy of a wink. The title’s “house of horrors” refers not to an excess of gore, but to the good doctor’s deck of Tarot cards which he uses to tell the fortunes of the five men with whom he shares a railroad compartment. Needless to say, as the stories unfold, their futures are not bright.

Two of the stories are more humorous than frightening. In one, jazz musician Biff Bailey (Roy Castle) gets in supernatural trouble when he steals a tune from a voodoo cult. In the other a young doctor (Donald Sutherland) has to come to terms with the fact that his nubile wife Nicolle (Jennifer Jayne) is a vampire. The most traditionally horrific story is about the return of a werewolf to fulfill a family curse. Another, about a vine that defends itself when anyone attempts to trim it, moves from an initially preposterous premise to an ever-more unnerving question: what could we do if plants bit back? The best story stars the always reliable Christopher Lee as art critic Franklyn Marsh fleeing the literal clutches of dead artist Eric Landor (Michael Gough) whose work Marsh has disparaged.

The presence of Lee and Cushing inevitably conjures up comparisons to Hammer Films, but while not one of their productions, Dr. Terror has many of the qualities of the studio’s output. The big difference is the contemporary setting, which has both benefits and drawbacks. The chief gain is to make gruesome horror a modern possibility and to recognize that a vampire or a werewolf doesn’t have to wear a costume to be frightening. The major loss is the sense of atmosphere produced by the exotic period settings of the Hammer horror films. For example, when Bailey flees an evil spirit in the voodoo segment, the shiny tape recorders, record players and contemporary dishes in his apartment just aren’t quite as evocative as the murky castles, forests and villages of Transylvania.

The creepiest atmosphere is actually reserved for the cramped train compartment, trapped with the six men. The tactile claustrophobia is all the more remarkable given the subdued effort to convince we are in a train—just a little steam now and then, a touch of rocking back and forth, and the barely audible rhythmic clatter over the rails. The muted effects are really preparation for a twist that, when it comes, has to be attributed to our credulity, because we recognize in retrospect that the filmmakers have been playing fairly. It’s a clever ending in keeping with the film’s understated smarts. 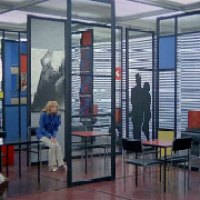 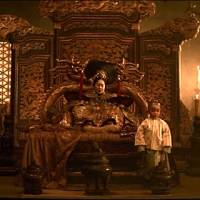 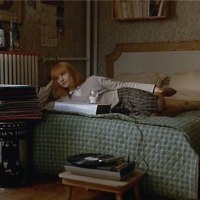 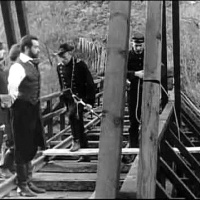